NEW! Get your swag on with our new STORE.

All proceeds benefit CUAPB and the Stolen Lives Justice Fund

Communities United Against Police BrutalityTM is a Twin-Cities based organization that was created to deal with police brutality on an ongoing basis. We work on the day-to-day abuses as well as taking on the more extreme cases. Our overriding goal is to create a climate of resistance to abuse of authority by police organizations and to empower local people with a structure that can take on police brutality and actually bring it to an end. We provide support for survivors of police brutality and families of victims so they can reclaim their dignity and join the struggle to end police brutality. 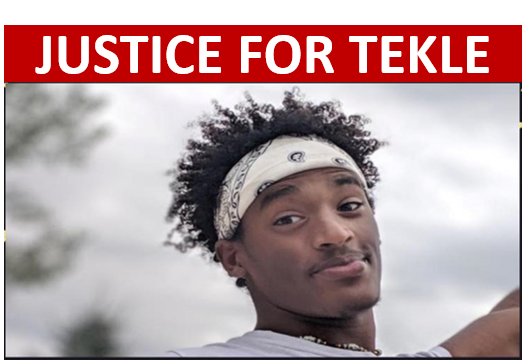 CUAPB has obtained video from a community member that captured the critical moments before Tekle Sundberg was shot and killed by police.  To place the video in context, we compiled it with other videos showing the scene from various angles and perspectives.  The only conclusion that can be reached from this video evidence is that the MPD shooting of Tekle Sundberg was not justified.

Under Minnesota Statute 609.066, officers may only use deadly force when their lives or the lives of others are imperiled based on the totality of the circumstances in the immediate moment that deadly force is used. What that means is that the decision to kill someone cannot be based on their behavior hours earlier. It must be based on what happened in that moment.

At the time Tekle was shot by MPD snipers Aaron Pearson and Zachary Seraphine, he was standing in the window of his apartment, breaking out bits of glass from the window.  He may have had a knife or cell phone in his hand but it is clear he did not have a gun in his hand and posed no immediate danger to police or the public.

MDHR and DOJ INVESTIGATIONS of the MINNEAPOLIS POLICE

Here’s how you can get involved:

You can also share your ideas for the consent decree directly with the MDHR here.

You can also report your experiences with the Minneapolis Police directly to the DOJ. Call 866-432-0268 or email [email protected]

This is an important opportunity to address our policing issues—we all need to be part of the solution!

The City of Minneapolis hired the firm Hillard Heintz to write an after-action report on the Minneapolis Police Department’s (MPD) response to the uprising that followed the killing of George Floyd.  Despite being paid $229,490.55 for the 86-page report, they looked at only 30 hours of body camera footage --that's three hours a day for the ten days they covered in their report.  They talked to only a few people who were hand-selected by the city, and otherwise engaged in poor practices in preparing this biased report. Their focus on central command structure issues while erasing essential historical context, their tendency to frame protesters as outside of the community and not members of the community, and their lack of attention to violations of civil rights and civil liberties render this report invalid.

It would seem that this after-action report’s purpose is to orchestrate a more efficient quelling of dissent rather than examining the root causes of that dissent.  The HH report provides a city-friendly narrative that it's the protesters that are the real problem, not the continued police violence that the City enables and that the community is forced to protest.  Thus, it takes us in the wrong direction entirely.

The city’s reliance on a biased corporate entity to prepare this report is part of a trend of privatizing police reform, rather than listening to and adopting community recommendations.  When the city contracts this work to outside entities, it is those firms -- not the public -- who shape the direction and scope of police “reform,” which in this case looks like increased militarization and suppression of dissent.

See our Analysis of the Hillard Heintz After Action Report here.